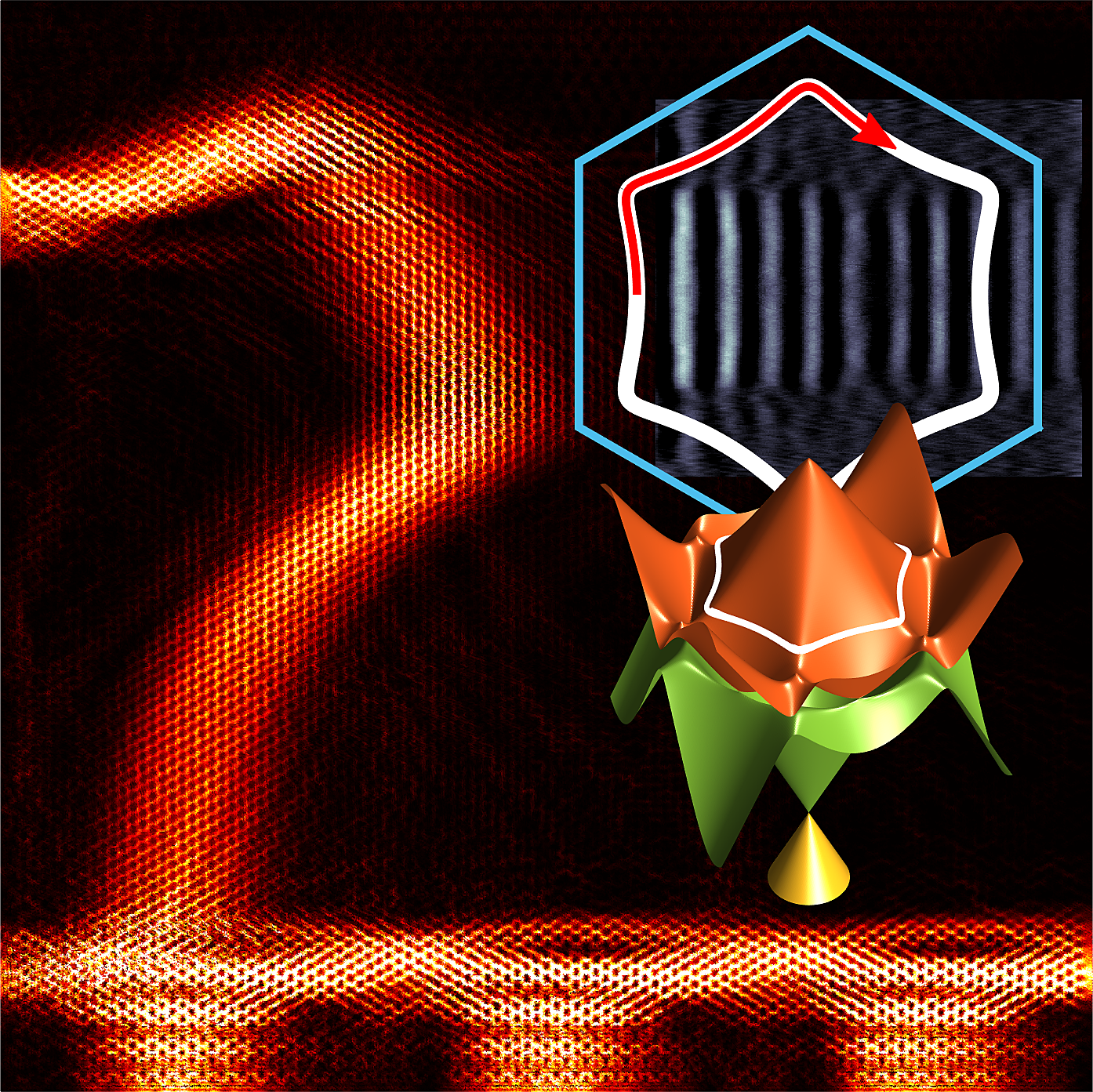 Electrons moving in a plane under the influence of a perpendicular magnetic field is known to exhibit the so-called cyclotron motion described by circular orbitals due to circular Fermi contour that describes isotropic electronic transport. When the energy bands are modified, however, Fermi contours are no longer circular, and the cyclotron motion of electrons can be described by peculiar orbits of potentially all kinds. Superlattice, a periodic potential of longer periodicity superposed on top of the atomic periodic potential due to a certain host lattice such as semiconductors or the recently popular material of graphene, provides a natural platform for observing interesting transport behaviors due to band structure modifications.

In a recent publication [1] coauthored by Prof. Ming-Hao Liu and colleagues reported detailed transport measurements and simulations for a graphene superlattice device, revealing unusual behaviors of the Fabry-Pérot interference fringes that can be well explained by hexagonal cyclotron motion. Experimentally, the graphene sample was encapsulated by hexagonal boron nitride (hBN) layers, with one of them being closely aligned with the graphene lattice, leading to the so-called moiré pattern due to interference between two slightly different lattice periodicities. Such a moiré pattern has been confirmed to serve as an ideal superlattice potential for graphene since its discovery in 2012 [2]. The hBN/graphene/hBN stack used in [1] is shaped into a two-terminal device with its local carrier densities controlled by a global back gate and a local top gate that divide the device into three regions, each of which being electrically tunable in their carrier densities.

Because of the superlattice potential, the graphene band structure exhibits not only the conic structure with the conduction and valence bands touching at one point, known as the Dirac point, but also secondary Dirac points, in the vicinity of which the Fermi contours are strongly distorted. Typical pnp junction devices made of single-layer graphene have been previously reported to exhibit Fabry-Pérot fringes due to electron wave interference. By sweeping over the top (controlling the central region) and back (controlling the outer regions) gate voltages, the conductance map typically shows four distinct quadrants, two being bipolar (npn and pnp) where Fabry-Pérot interference is observed, and two being unipolar (nnn and ppp) showing no Fabry-Pérot interference. In the present study [1], the four quadrants of such conductance maps are further divided into four sub-quadrants due to the secondary Dirac points generated by the superlattice potential. Based on the scalable tight-binding model [3,4], such conductance maps at zero magnetic field are nearly perfectly reproduced by quantum transport simulations performed by Prof. Liu.

When the magnetic field is turned on, the Fabry-Pérot fringes show the standard dispersing behavior basically due to the competition between the kinetic phase and the Aharanov-Bohm phase when the cavities are tuned in pnp or npn configurations. This behavior has been previously reported for graphene devices without superlattice effects. When the carrier density and hence the Fermi energy in the central cavity of the present graphene superlattice device is tuned to somewhere close to the secondary Dirac point, the observed Fabry-Pérot interference fringes show no dispersion in the weak magnetic field regime, and suddenly disappear when the field strength reaches around 0.3 T. The independence of the magnetic field implies straight electron trajectories, strongly contrary to typical cyclotron trajectories which are circular. Such unusual magnetotransport conductance maps are also reproduced by quantum transport simulations. By imaging local current densities, the electron motion is confirmed to exhibit hexagonal cyclotron trajectories due to the deformed Fermi contour. When the magnetic field is weak, the length of the edges of the hexagonal cyclotron trajectory exceeds the cavity size, such that electrons follow nearly straight trajectories within the central cavity, showing no magnetic field dependence. When the magnetic field exceeds a certain value, the length of the edge of the hexagonal trajectory is shorter than the cavity size, leading to a sudden suppression of the conductance and hence the disappearance of the Fabry-Pérot interference fringes.

This work [1] published in Physical Review Letters was chosen as Editor’s Suggestion.

Electrons moving in a plane under the influence of a perpendicular magnetic field is known to exhibit the so-called cyclotron motion described by circular orbitals due to circular Fermi contour that describes isotropic electronic transpo...